What Is Wrong With This Study?

Just this past week, a company with whom I work with on their advertising, was talking to different radio stations to find a good fit of a station and radio show personality for doing some advertising for their company. The radio station submitted a packet that included a case study to prove their success as follows:

Show Host has been endorsing ABC Company for several years. ABC Company knows when Show Host endorses a product or service, his audience is listening – and Show Host has numbers to prove it. In 2010, Show Host’s endorsement, a $67,000 investment, brought ABC Company $369,000. That’s a 550.7% return on investment!

First of all, there was a positive return on investment, but certainly nowhere near 550.7%! Unfortunately, this is a very common misconception among people buying advertising. ROI should be based on profits, not gross sales/revenues.

To make it real simple, if ABC Company has a marketing budget of 10%, that means if they spent $67,000 on advertising with this show host, they would have needed a minimum of $670,000 in gross sales before this advertising would have given the profits they planned for. (If their advertising budget was around 5%, which is probably more common for many companies, gross sales should have been $1.34 million.)

Any company that advertises should know the results they need to reach for expected profitability. In figuring out a real ROI, the actual cost of delivering the product or service, overhead, and commissions all have to be included in addition to the cost of advertising in order to figure out profits, which then become the dollar amount for measuring Return on Investment percentage.

Comparing only the dollars spent on advertising to the dollars taken in is incorrect and misleading. It will not lead to the full potential of your marketing dollars!

Based on a typical trades company, we put the pie together to show where all the dollars would go in figuring out the true ROI. In reality, a lot of service-related companies are selling at a 60% Cost of Sale or more, and some of the other percentages may fluctuate from company to company, but in this example the sales were priced and sold for a 55% cost of sale. A more true and accurate depiction of ROI would be: 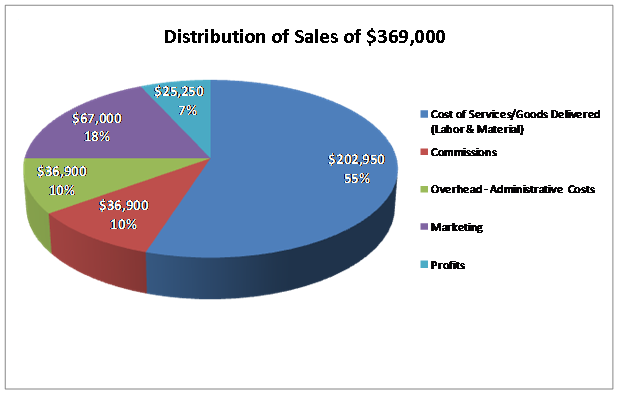 In other words, to figure out the true ROI, take your profit dollar amount and divide it by dollars spent on advertising.

As you can see, even though there was a profitable ROI in the scenario above, there is a huge difference between the actual 37.7% and the 550.7% that was claimed to be the return.