How Do You Track Leads?

It is known and verifiable that tracking will increase revenues. Knowing that,

How Do you Track Leads? 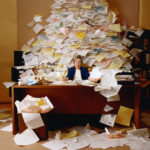 Yellow Sticky Notes Are Not Considered a Tracking System!

The main reason tracking increases revenues is because you have a system in place. By the way, yellow sticky notes are not considered a system, or a revenue-producing system anyhow. I shall explain…

In the not too distant past, I made a visit to a certain company. Now, mind you, this was not just any ordinary company, but a company that has a very good reputation and quite a number of employees. They have their trucks all over the valley, they have advertising everywhere, and from the looks of it, the employers and employees are bringing home some money.

Expecting to see a company that would have a pretty good system for handling leads, I asked what their procedure is for lead, sales and marketing tracking. My answer from the gal at the front desk? “Ummm, nothing. I just write down the name and number and give it to one of the guys to follow up.” No spreadsheets, no database, nada, nothing! Quickbooks was the only tool they used for tracking leads, and that isn’t even a lead tracker….it’s a sales tracker.

QuickBooks is NOT a Lead Tracking System!

This was surprising to me. First of all, the owners were spending a significant amount of money on advertising and had absolutely no idea of the return. Who knows whatever happened to all those yellow sticky notes or pieces of paper written and handed out? There was no count on even something as basic as the number of leads, much less the ability to tie those leads to any certain advertisement or salesperson.

Second, these people were not even capturing names and addresses of prospects they could market to in the future if they did not buy now. Many companies pay top dollar to buy completely cold mailing lists in an effort to start marketing campaigns. These people had a warm list at their fingertips and did nothing to generate business from it. They were squandering a huge asset that would help them grow their business.

And third, they have absolutely no way of knowing  sales reps’ strengths and weaknesses, not to mention how many leads versus sales are coming in. Since the cash intake has been comfortable and in fact generous, they were not concerned. There was no way for them to analyze and adjust their training for their salespeople because they had no way to measure what kinds of leads were lost sales. By this I mean, maybe a salesperson was bringing in all kinds of sales for one type of product or service. We do not know how much money was left on the table for sales he/she did not know how to sell.

Sticky Notes are Not a Lead Tracking System

This scenario is not uncommon. I believe that if the owners understood how much more they could be increasing revenues just by following the numbers on any one of the 3 points mentioned above, they would not be so lackadaisical in tracking. Even one recovered lead can mean thousands of dollars (long or short term) to a business owner, depending on the product or service offered.

Another reason for not having a tracking system in place is because it seems like such a daunting task. Many of them may remember the headaches of instituting new systems. Many of them are afraid of the costs of initial investment. Many of them really have no idea where or how to begin collecting the data, and once they have it, they are not quite sure what to do with it. These are typically fears associated with prior experiences, but nowadays there are so many simple yet effective solutions available, and these solutions will not even be considered a cost in the end because the result is increased revenues. We compare it to putting gas in your car. Sure, it costs something to drive a car, but what good is your car if you can’t drive it and it is unable to deliver you from point A to point B? It costs something to run your business, but why run it when you have no idea where you are coming from or where you are heading? Besides, unlike gas, a system should increase your revenues and pay you back many times.

Hopefully you’re not one of those who just scratches a lead on a piece of paper and sticks it in a sales rep’s mailbox and counts on that sales rep taking care of it from there. If you are, a simple change into a tracking system may change the entire direction of your business or grow you more profitably from where you stand right now.

Forget the Yellow Sticky Notes; Get a Lead Tracking System Instead!

Remember, if you can’t measure it, you can’t manage it. Hard to manage all those yellow pieces of scratch paper floating around out there….